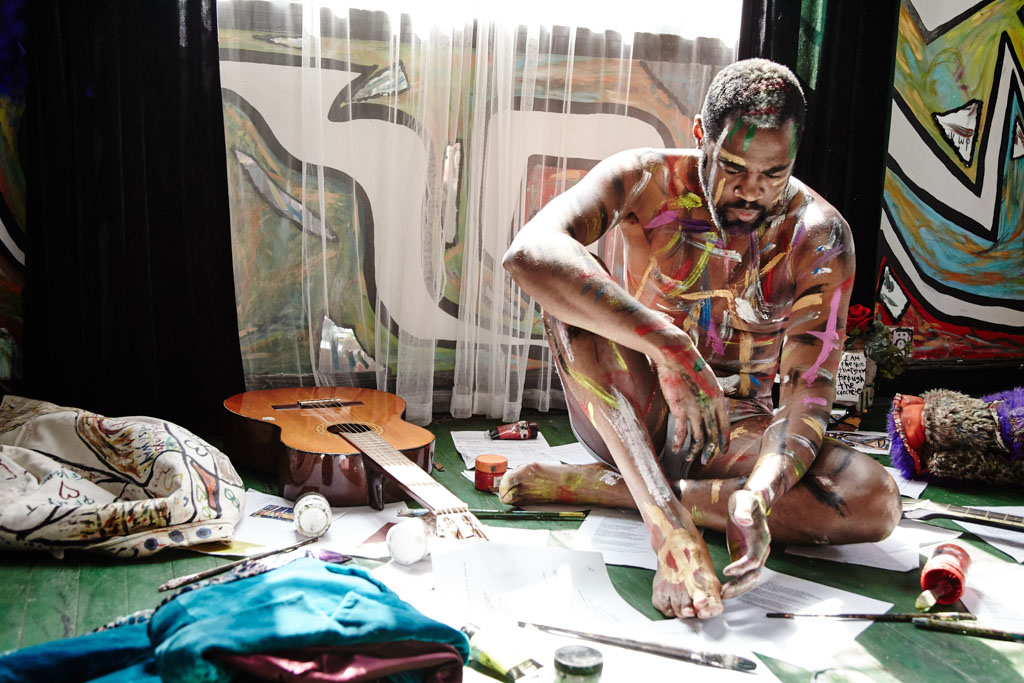 The series “Making It in Shanghai” is a monthly feature that focuses on people who have found success and made a significant cultural impact in Shanghai.

“Steps of courage lead to places of confidence.” – Redic

When people talk of “making it” they are usually referring to becoming successful in their chosen discipline. In the world of music and performing success can be relative, so for some it’s just being on stage doing what they love, and for others it means being recognised by a wider audience for all they have achieved.

I sat down with Redic, a musician and multi-disciplinary artist, to get his views on making it in Shanghai. A Chicago native, he only goes by his stage name, which is in fact also his family name. He adopted this when he was part of a creative collective in LA, run by Leila Steinberg, who was Tupac’s original manager back in the early days. He dropped David, although, “I usually fess up my full name when I meet other Davids,” he says.

Having been in China for over seven years now, Redic has built a reputation in the city as an accomplished performer and artist. “As an artist you put things out there and so the work you do has to be received,” Redic tells me over a drink at Coffee Belt. So does he think he’s made it? “A good way to engage and tell if you’re making it is to ask is the work being received? Because if it’s not being received then I’m not in the right place. For me it has been received and I’m grateful for that. I have a saying, I’m going to die a work in progress!”

“I’m a creative octopus,” Redic makes clear. “I believe music is the soundtrack to life and art is a snapshot of life. As an artist I aspire to give people songs, visual art, poetry and fashion that reflect the human experience.” Redic is an artist in the purest sense. Although we are discussing his music, it’s clear that he sees his art intrinsically linked to his music, they are one in a sense. Often times a song he writes will overflow and result in a new piece of art, or link to an existing piece.

Moving to a foreign country can be hard at the best of times, and certainly as all expats in Shanghai will know, China can be a real shock to the senses. The culture is so different, the language barrier can be debilitating and settling can be extremely hard. Trying to make it in the music industry anywhere is tough, so to come to Shanghai and build a career in music takes some guts.

Redic tells me of how when he first arrived in Shanghai he had no music contacts. “I remember standing on the JZ stage and was like, if this is where music is happening then I want to perform on this stage one day,” he muses. He kept on attending jam sessions and open mic nights at places like JZ Club and Cotton Club, and getting to know the local movers and shakers.

Eventually he met his songwriting partner Asaph Lerburn who is from Malaysia, and started the band Redic & the Storm Riders. Together they write the original songs for the band, the style a fusion of rock, RnB, gospel, and world music or, “eclectic rock, soul music,” as Redic puts it. The band is made up of people from all around the world. Luis Coelho, who plays electric guitar, is from Portugal, and the keyboardist, Yang Guang known as Sunny, is from China, with bass player and music producer Damien Banzigou, and drummer Pascal Naigom both hailing from Mauritius. “Years ago one of my mentors said we’re like a vegetable soup pot,” Redic tells me. “You can still taste the distinct flavors, but all the other different ingredients rub off on you. So artistically just being in this type of climate and performing has definitely influenced the way I write, and if not perform as well.”

As we talk more the topic of moving to China comes up. So how did Redic end up in Shanghai? “Outside of China these stories are very intriguing, but inside of China not uncommon,” he says. “I thought I’d be here for three months on a performance gig in Guangzhou.” It was 2010 and the World Expo was happening in Shanghai. “I was like, what am I doing in Guangzhou, the world is in Shanghai!” It was shortly after this that, through friends of friends, he moved to Shanghai and began the long path to finding his way in the city.

“One of the things I love about Shanghai is when I look at the audiences here, to me Shanghai in itself is not a melting pot, but it’s a gathering,” Redic explains. “So you have foreigners from all over the world here, and you can still feel the distinct culture and you also have Chinese from all over the different provinces represented in Shanghai.” This is what makes Shanghai so special for the people who live here. It’s the fact that no matter where you’re from you can be a part of the city and still retain your own culture and identity.

Redic is a part of the JZ Music family. “I respect what Ren (JZ Music boss) and the guys over at JZ are doing keeping live music alive,” he says. The past two years he’s performed at the JZ Spring festival, which is held annually during the Labor Day holiday at Jingan Park in the city centre. “I think the last two performances at the JZ festival were really a turning point for our band,” Redic tells me. “The last two performances, last year and particularly this year, there was so many people out and we had good timing and perfect weather. So more people who were not exposed to what we do were really able to get close to that. I also felt that the city of Shanghai turned up and to be able to share with them was really exciting.”

Has he noticed a big change from when he first arrived, I wonder? “Musically there appears to be more concerts and events, but also live music venues that are opening up. In that regard that is one of the biggest changes. Also I’d say the music appreciation. There’s less talking when I’m performing now!” he says with laugh.

As we come to the end of our chat, I’m intrigued to know what advice Redic would give to others who are in a similar position to him when he first arrived in Shanghai. “The first thing I’d say is give yourself permission. Often times we are waiting for other people to say you can do it, or it’s ok. You could be waiting your whole life for someone to affirm and give you permission.” Without a doubt this is sage advice indeed.