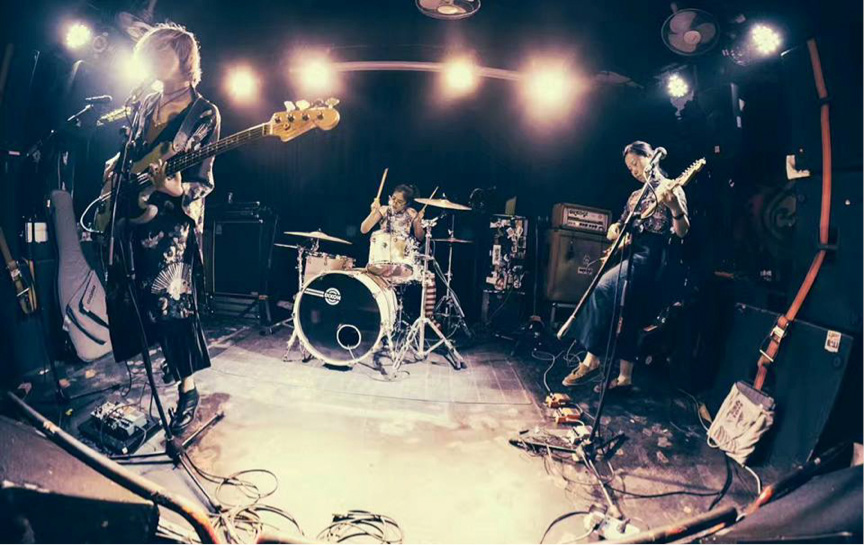 To get you started I present five bands who are setting the beat of the indie music scene in Shanghai. They are a mix of Chinese bands and foreign bands, from heavy metal, through post punk to ska.

Round Eye have a polarizing reputation, with the guys admitting, “some people hate us,” but they are without a doubt a staple of the Shanghai indie music scene. An experimental, sax wielding, freak punk outfit, they have cultivated a loud and controversial name for themselves since forming in 2012.

They have toured China several times, been on European tours and recorded two albums. Their studio sound is in the mold of Captain Beefheart’s Trout Mask Replica or earlier efforts by Butthole Surfers and Flaming Lips. They have even recorded a music video in North Korea!

They have shared the stage with The Fleshtones, MDC, Mike Watt + The Missingmen, D.O.A., The FUs, The Boys(UK), Paul Collins Beat, M.O.T.O,, Ceremony, lceage, as well as notable eastern bands P.K.14, SMZB, SUBS, Hang on the Box, The Surf Coasters, members of Carsick Cars and Joyside and Misandao, and are currently signed to Sudden Death Records.

Their shows involve them clearly having fun on stage, but this is their draw: The crowd also has fun, which is the reason we go to watch live music. Round Eye are more than just a party rock band, with their punk guitars, heavy drums and charismatic frontman making them a band you must see at least once during your time in Shanghai.

A rowdy, high-octane punk outfit who play fast and violent without being aggressive, Dirty Fingers are a band to see for their full energy, rowdy in-your-face shows. Formed in 2013 by Xiao Tian, whose guttural punkish roar holds the band together, they have been playing gigs from Yuyintang to Inferno on a regular basis.

The band got their name from a book about teenagers who love The Beatles. In the novel the teenagers decide to form a band, the name Dirty Fingers on their list of band names. “They didn’t choose Dirty Fingers. But I thought it was nice,” explains Xiao Tian.

Dirty Fingers have released one album to date, all lyrics written by Xiao Tian, while guitarist Xiao Hai composes the music. “I want Chinese people, my people, to stop listening to heartless music, Chinese pop songs,” say Xiao Hai. More than a punk protest band for Chinese youth, Dirty Fingers don’t just concentrate on the music, but also the performance. If you’ve ever watched Chinese performers and thought they are expert musicians, but have no stage presence, then Dirty Fingers are the opposite of this. They cut against the grain of Chinese music in a positive way.

Formed in 1999, The Loudspeaker are a crust hardcore punk band, and a mainstay of the small but passionate skate/street punk scene in Shanghai. They are made up of three good looking Chinese guys, lead singer Li Yi Han looking the part of heavy metal frontman, with the crazed look of a now healthy former heroin addict.

The Loudspeaker’s sound has evolved into more of a hardcore metal outfit as they have developed, their straight-forward, hard driving, and intense music remaining a positive contribution to Shanghai and China’s underground hardcore metal scene. Even if you’re not into the sound, you have to appreciate how energetic and polished they are as a group, and also for how long they’ve stayed in the game.

Their live performances demand the audience to get involved, the band raising their guitars over their heads, jumping and bouncing around the stage, not to mention the frenetic shredding of the guitar, faces all distorted. It’s hard to take your eyes off them – that’s what punk rock is about.

They don’t mess around between songs and let the audience lose focus, they just rip right through their set – they are all business, their songs fast and energetic so once you get high you stay high until the very end. If you want to get to know the underground music scene in Shanghai then The Loudspeaker must be on your list.

A three-piece all girl post-punk band is something of a rarity in China, but Old Aunties are becoming a mainstay of the thriving live indie music scene here in Shanghai. Formed in 2015, they have gained popularity quickly and have proved that age, gender and upbringing are not barriers to being punk. Currently recording their first album, they are certainly one to watch over the next few years.

Featuring three musicians from other Shanghai rock footnotes including Pairs and Banana Monkey, Lao Ayi, to use their Chinese name, are considered a sort of supergroup, although the band would dispute this. The fact they have already toured Brazil, becoming the first all-female Shanghai band to ever play in the South American country speaks volumes in itself.

Mixing post-punk, noise, industrial and shoegaze, their heavy bass riffs from singer Awu hold the band together, while the lead guitar of F is all punk thrash power chords. But the real core emanates from Axiang on drums. Her 160cm height and small frame belie the punk sound she gets out of her drum kit, the drum solos she sometimes plays often the highlight of the show. Awu’s piercing melancholic vocals are reminiscent of German electro samples, her high pitched screeching a perfect compliment to the driving guitar and powerful, metronomic drums.

Formed after a substantial subterranean drinking session in 2014, Molemen are a seven-piece ska and reggae outfit, and they bring something different to the Shanghai indie music scene. They perform only original music in the spirit of fashioning the so-called ska ‘fourth wave’. What is without doubt is that they have one of the most thoroughly enjoyable live sets in town.

Their combination of skilled musicianship and catchy, jump-along tunes has seen the Molemen become a regular fixture on the Shanghai gig circuit. Having started out as an all-ukulele ska band they have developed to use a variety of instrumentation – bass, drums, guitar, ukulele and trombones – to create quick tempo rhythms and melodies with soft and hard edges that are always danceable.

The subject matter of their songs ranges from undying army Colonels, trips to the pub, internet fads and losing internal battles with oneself, making them always relevant with their audience. If you’re not into the hard punky sound of a lot of the underground scene, but want to check out some live music then maybe the Molemen is for you.