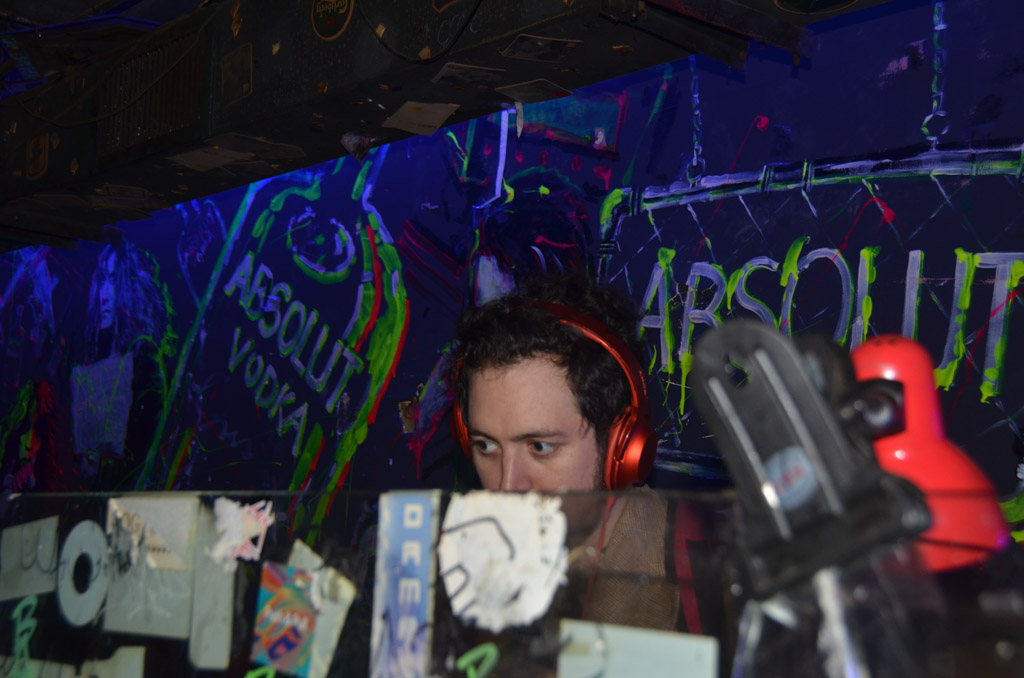 The series “Making It in Shanghai” is a monthly feature that focuses on people who have found success and made a significant cultural impact in Shanghai.

“I like to introduce music to people” – DJ B.O

It’s Thursday afternoon and I’m scheduled to meet Brian Offenther (a.k.a. DJ B.O) at 2pm at The Apartment on Yongfu Lu. I’m to spend a day hanging out with him to live the life of a DJ for a short time.

I wonder what can a DJ be doing at 2pm? Just waking up I suppose, because you know they party all night and sleep all day, right? Well, actually from my day hanging out with B.O I come to learn that this couldn’t be any further from the truth.

I’ve known of DJ B.O for a while. He gets about Shanghai quite a lot, either organising tours with rock bands or regular DJ slots at C’s and Le Baron, amongst others places. I even read that in August 2012 he was the “first DJ to rock the Democratic People’s Republic of Korea,” according to the Vice music channel, Noisey. So I was intrigued to see first hand what a typical day for him would be like.

As I rock up to The Apartment I found Brian inside, hunched over his computer. I wonder why we meet at The Apartment and he explains his first meeting of the day is here, but also he has a good relationship with them so they often let him cotch there for the day. His schedule for the day is like this:

It’s a pretty busy and varied schedule and I was interested to see what all the meetings contained. It put into perspective what a DJ needs to plan to be able to have a regular stream of gigs.

I come to learn that Brian doesn’t use an agency, but organises his schedule himself. “I like to tour,” he tells me, so he’s actively always trying to find new gigs. The tour of Vietnam he has planned in July sounds pretty cool, and I find out more about that later.

He explains that recently he’s been DJing more, as opposed to tour or event management. I’d seen a video about a tour he managed with a Shanghai band called Banana Monkey in Mongolia. In fact they were the first Han Chinese rock band to play in Mongolia, something of a coup I suggested.

So does he like to be the first to things? “Doing new things is exciting,” he says before rattling off a list of the firsts he accomplished:

2:30pm rolls around and he’s into his first meeting of the day, with Milica from The Apartment. They discuss plans for a July 4th event, which was subsequently cancelled, “part of event production, sometimes shit just doesn’t work.”

I was quite surprised to learn that he hadn’t ever played a gig at The Apartment before. He suggested that maybe they thought his style of music didn’t fit. So what is his style? Some people say he’s “the retro guy or the nostalgia guy,” as he puts in, but he doesn’t really like that label. For sure he’s not into electronic house music, “apart from maybe electro-swing,” but how to define DJ B.O’s music?

He calls it “Asian-eclectica, Ex-post Esquerita and Rockabilly funk,” taking you through the varying styles he may cover. Think maybe Bangladesh hip hop or Bangkok Funk to get an idea of the music you’ve never heard, but will most likely enjoy. As long as the music has groove he’s into it.

Around 3:30pm Clem de le Crème, a Shanghai-based MC turns up to discuss their tour of Vietnam under B.O’s Funky Teppanyaki moniker. The meeting is about confirming dates and times, places they’ll have gigs at in Ho Chi Min and any other plans associated with the tour. They even listen to the music of a Vietnamese rapper, a guy who’s Brian’s connect for the tour.

When Clem starts asking questions and advice about touring in general, it occurs to me that Brian is pretty experienced at this. He’s got a reputation for getting out there, but it’s interesting to see that he’s willing to help others with his experience, and even contacts. He offers Clem the chance for other gigs via his contacts.

It’s almost 5pm now and Stuart, the owner of The Apartment, is free to help record the podcast Hear in Shanghai. It’s a regular feature about musicians in Shanghai and this one was with Wink and Raz B of B2K fame, but he never showed up, and finally cancelled.

Next up is the meeting with Minjin, the vice-president of Shanghai Mongolian student association. They discuss helping Mongolian students finding part-time and intern work with The Apartment.

Brian has a long association with Mongolia, having first moved there from Coral Spring in South Florida, “a real shithole,” as he puts it, with the Peace Corps in 2007. He’s kept this association and it’s let him find a niche in Shanghai, something that’s let him do the firsts he loves.

In fact in return for helping Minjin, he manages to get her to help with a project he has taking Andy Summers (guitarist of the band The Police) to Mongolia in September – another example of ‘doing a first’.

It’s around 7pm now and we have time to grab dinner. Brian tells me that another meeting has come in, this time with a Mongolian comedian called Zolo. Before this and as we’re chatting over dinner I ask, do you think you’ve made it in Shanghai?

“To me it is a journey not a destination. I’ve got goals and I’ve got things I want to do, but I’m 100% sure that when I do reach them, it’ll be time for me to make new goals or time for me to get the hell out of Shanghai.”

At this point it became clear to me that he’s very hardworking, and is always making opportunities for himself. He doesn’t watch TV, but is into movies, he’s watched 19 this calendar year. In fact he tutors a student once a week about film.

He also does other teaching outside of music. Every summer he does five weeks work with a university in Nanjing, about film, and also a music related course with Duke Kunshan University. The truth is to make it in Shanghai you need to be resourceful. What advice would he give to someone wanting to make it in SH?

“I got into the DJ gig because I was producing live music events and then there was room for a DJ there. I thought it would add to the night. And then from there I set my name and rolled out from there. It certainly involves doing a lot of shit gigs to build up some cred and then you get better and better slots.”

It’s getting pretty late and I’m getting tired. But I have been up since 7:30am so it’s no surprise. Zolo shows up and interrupts dinner to talk about opportunities for Mongolians to do events in Shanghai. Brian definitely has his fingers in a few Mongolian pies.

We set off by bike to C’s as this is how he mainly travels around. When we arrive around 9:15pm, he preps for the gig at 10pm. I notice Brian doesn’t get a beer, but opts for water instead. “I’m not a complete teetotaler, but rarely drink,” he tells me. I always associated DJing with the party lifestyle, but I’ve come to learn that when you start to do this professionally the stereotypes are busted.

As Brian starts his set I make my move to leave. I hang out for a couple of songs and have a little groove as some girls take to the dancefloor. It’s gone 10:30pm and if I’d started my day later I may stay for longer. As it is I’m no DJ, but I’ve come to learn there’s a lot more to it than getting drunk and playing tunes.